THE HISTORY OF STRAFFORD, MO

“My joy for baking really started as a child.  I grew up watching my grandmother bake and decorate cakes.  She made many of my childhood birthday cakes and I was amazed while watching her make roses for wedding cakes.  I’ve always enjoyed baking at home but really found my passion for it in 2005 when I started working in the bakery at a grocery store.  I loved just about every aspect of the bakery.  From the smell of the breads, cookies and pies baking, to all of the beautiful cakes.  After a few months of working there, I had found out how intrigued I was by the cake decorating.  I was lucky enough to have a great mentor that spent much of her time working with me on decorating.  Although I have never had any formal classes or training, I have learned some great techniques that have helped me excel in something that I enjoy so much.  Now, with 16 hrs experience, I am thrilled to be at Common Grounds and excited about this new journey!” - Becky Nichols

The narrow building at 100 E Pine Street was built before 1900 and was at one time a farm supply store. Like many buildings along Route 66, it has two front doors. Many businesses did this when Route 66 was established so that they would have an entrance on Pine Street and on this new main street in Strafford. The building sat empty for a long time, but a year of renovation and hard work transformed it into the coffee shop that it is today.

What is now Strafford, Missouri was once settled primarily by the Delaware tribe of Native Americans. The 1830s saw a huge influx of settlers from neighboring Tennessee, Kentucky, Virginia and North Carolina. These immigrants typically came here by what is now the St.Louis – Springfield road, which played a significant role in the Trail of Tears, which was the forced relocation of Native Americans out of their homes in the late 1830s.

A growing population meant a post office was built in the 1830s, believed to be located just 2 miles north of Strafford and was only the second post office ever in Greene County following Springfield. As the decades past, schools were established and eventually Old Wire Road was developed along a new telegraph line from St. Louis to Springfield to Fort Smith. Old Wire Road was a major crossing route for Union soldiers before the Battle of Wilson Creek during the Civil War. Residents in the Strafford area took part of both Confederate and Union activities and many volunteers formed a company of the 72nd Enrolled Missouri Militia.

After the Civil War, in April of 1871, something big happened. The Atlantic and Pacific Railroad was completed up to Strafford and the town of Strafford officially came to be. As a shipping and receiving point along the railroad, Strafford continues to grow and change over the next century.

The Bank of Strafford is established in 1911 .

The Strafford Times newspaper is establishing in 1913 .

The 1920s brought the automobile age to Strafford and in 1926, Route 66 is designated all the way from Chicago, IL to Santa Monica, CA. Paving of Route 66 through Strafford is completed by 1930 and businesses spring up along the road.

Even during the economic hardship of the 1930s , the local economy in Strafford is being affected by tourists and travelers like never before.
Southwestern Bell Telephone Co. brings dial telephone service to Strafford residents in 1958.
The completion of I-44 in 1970 brings increased traffic to the area. 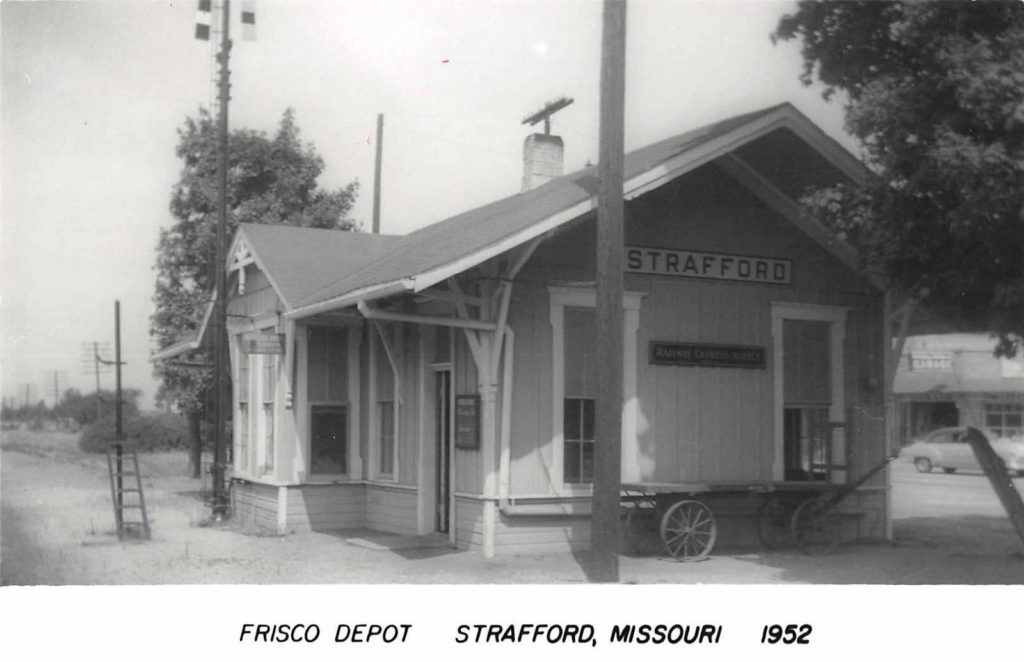 Check out more details about our history on the Strafford, MO website.“The history of Strafford is based on its location, not in proximity to natural resources, but to transportation routes. Early immigrant routes, the Trail of Tears, commercial overland trade with St. Louis and civil war era military traffic impacted the area before the founding of the town. The town of Strafford owes its founding and initial growth to the economic engine of the late 1800’s, the railroad. However, its long term survival and status today is the product of the automobile. Route 66 and its successor Interstate 44 has shaped the town to its present form.” -www.straffordmo.net